Man Down! Man Down!

DAILY PROMPT: In A Crisis

Hmm, am I happy with the way I react to a crisis? The answer is a big fat YES! I would go as far as saying I reacted to the latest crisis that crossed my path like Wonder Woman in comparison to the statues I was with while all hell broke freaking loose. Nothing like a crew of blank stares when you’re in the middle of a real life Man Down…Man Down crisis. 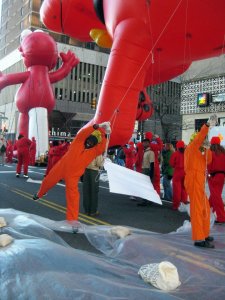 First: As all my followers already know, I had the pleasure of being a Latex Engineer in this years Thanksgiving Day Parade here in Philly. If you’re new you can read about it right here The Oscar Goes To. That’s the victim right there on the left.  He is a Humane Law Enforcement Officer, not to mention hilarious. We were in charge of the Lorax’s head together….before the incident.

Any who, after all was said and done we were instructed to start letting the helium out of the balloon as we all walked back to Deflation Station. Now, as someone who was new to the world of latex engineers, I was unaware of the dangers of helium exposure. Maybe it’s common knowledge and I’m just not common, I don’t know.

I was in charge of letting the air out of the tail of the Lorax, while my new friend Officer

Hold on Wayne…I’m On My Way!

Wayne, who was a seasoned Latex Engineer, was working on a larger part of the balloon. Unfortunately, he inhaled a large amount of helium and started to come towards me in slow motion. I honestly thought he was joking around, but did think it was odd that his glasses were crooked, he was walking in slow motion and lost his ability to speak. Other than those small details, all seemed normal. Next thing I knew he started to GO DOWN.

MY REACTION:  I lead off with a very loud scream. This is always good to alert others who may want to assist. I grabbed him and was able to guide him to the ground slowly. This is crucial to avoid bludgeoned skulls. I crouched over Officer Wayne and began yelling in is face “ARE YOU OK?! ARE YOU OK?!” I wasn’t actually looking for an answer per se, but more for signs of life. As I looked up for assistance from Jeez, I don’t know, one of the hundreds of people in the immediate vicinity, I spotted my daughter and my friend standing perfectly still and staring at me in horror. Two statues would have served me better than these two…..dear lord!

I am happy to report Wayne got up, straightened his glasses and continued to fold up the Lorax like a boss. I on the other hand had to answer the questions as to WTF just went down from the statues who suddenly came to life!

Considering havoc has a tendency to break loose at even the most enjoyable of events, it’s best to remain calm, scream loud and Enjoy the Ride, with your badass boots of course!