Hello everyone, it’s me Chester the Beagle and I’ll be guest blogging for Lisa today. She’s been such a good nurse lately I thought I’d cut her some slack. I’ve been sick as a dog!  My troubles all started back on Valentine’s Day when I woke up looking like someone who may be employed in a bell tower. One minute I’m scratching my ear, the next I’m looking like Quasi Moto. 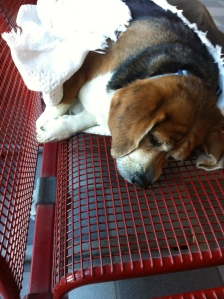 My memory is sketchy at best on the details, but I do recall Momma calling the doctor, me getting a sausage and then the rest is somewhat of a blur. I’m not pointing paws here, but I think there was a rophy in that sausage! That’s all I know is when I finally woke up my nails were cut, my butt was sore and my ear was feeling better. Either I went to the Doggie Doctor or a seedy massage pallor…I’ll never really be sure.

Well, one thing I know for sure is I was feeling like a puppy after that adventure! Momma has been giving me a little chicken every morning a pleasant surprise indeed and by the afternoon I was skipping out of the gate. Woo…it felt so good to be young again! However, all good things must end and this includes rejuvenation.

During one of my puppy highs, I spotted a cat in the distance. I thought, “hey I’m feeling like a champ and I’m gonna get me some of that feline.” What the HELL was this old dog thinking? It has been almost 2 weeks since I skipped across that field and I’m still suffering. Momma said that chasing stray pussy never ends well…boy was she was RIGHT. I had to be wrapped in a blanket and carried back home by the humans…it was more than humiliating, especially with that feisty Boston Terrier looking on, mocking me with his agility.

This is NOT me! It’s the image in my head.

So there I was, trapped downstairs, unable to go up the steps with my bum leg ALL…OVER … A…CAT. Do you know what this means for me? I can no longer bask in the sun. There is no more going on the deck to bark at passer-byes and the worst part of all… I AM NOT ABLE TO GET TO THE KITCHEN. It’s tragic, simply tragic.

On Thursday following the “incident” I was a hot mess before Momma went to work. I’m not proud of my behavior, I just didn’t want to be alone and a little crying usually goes a long way, but she left anyway. I played it up until Dad got there to save the day. We both took a nice nap and life was good again. I may have gotten a little ahead of myself later that evening when I smelled something I haven’t had the pleasure of sniffing since Summer…a hot dog! Not, just any hot dog … an Applegate Farm All Organic Hot Dog. I’m sure you all know what happened next…yep…I RAN up the steps to get me some of that goodness!

The gates of heaven opened before me and I was standing in Doggie Paradise a/k/a … the kitchen. Who knew Hot Dogs had the

power to heal the lame? I was so happy to be upstairs in the living area that I slept late on Friday. It wasn’t until I tried to get up to do my doo doo duties that I realized that…umm…maybe I over estimated my abilities with those stairs. Hot Dog goggles, beer goggles, love goggles…they all make us do crazy things.

It’s been a rough week for everyone. Good ole Dad has been sleeping on the couch so I don’t get scared. Momma tried, but apparently I snore. The girl of the house is on Spring break, keeping me company during the day. If telling me to “stop faking” is company. The boy has been lecturing me on my weight one minute and slipping me a chicken tender the next. Are these mixed singles or am I on a chicken tender weight loss program?

Ugh, what’s an old dog to do? Something tells me there’s another rophy sausage in my very near future if I ever want to lie in another sunbeam. Until then … I think I’ll put my Hotdog goggles on and Enjoy the Ride!