A couple of years ago I found a little pamphlet or should I say it found me that contained the keynote address given by Arthur Larrabee at the Friends General Conference Gathering of Friends, which was held back in 1998. If you weren’t aware, I attend Quaker Meeting every Sunday. It’s where I’ve regularly been going for the last 3 years to … well … get my peace on.

One Sunday I entered Meeting very troubled. Things were beginning to get somewhat extreme in my head over a particular situation. It wasn’t good. I found myself sitting somewhere differently that day, but it was right where I was supposed to be, next to this wonderful little pamphlet. Psst…Lisa…sit here you need to see this now.

When I opened it up the words resonated so deeply that I found myself unknowingly crying.

I know right? I’m sharing this now because as I was cleaning during my oh shit, we’re having company for Easter frenzy, I came across the pamphlet in my house and paused to re-read it. This must be shared….it just does.

Simma down folks I’m not going to get all religious on you, but I am going to fill you in on some of the messages that I received that day. The first thing that hit me was the story he shared, which some of you may have already heard over the years. I had not. It is a Taoist fable of sorts … here it is.

An old man and his son lived in an abandoned fortress on the side of a hill. The son was the sole support of his father, and their only possession of value was a horse. One day, the horse ran away. The neighbors came by to offer sympathy. “This is a terrible thing,” they said. “How do you know?” asked the old man.

Several days later the horse returned, bringing with it several wild horses. The old man and the son shut them all inside the gate. The neighbors hurried over. “This is fabulous,” they said. “How do you know?” asked the old man.

The following day the son tried riding one of the wild horses. Alas, he fell and broke his leg. Sure enough, the neighbors came around as soon as they heard the news. “What a tragedy!” they said. “How do you know?” asked the old man.

The following week, the army of the emperor came through the village, forcing every young man into service to fight faraway battles. Many of them would never return. But the son couldn’t go. He had a broken leg.

The message here is that the old man lives in the now. He doesn’t attach himself to the big “What Ifs?” surrounding him. He embraced the situation he was presented with, therefore giving him peace of mind … which I was desperately seeking in my life.

My personal story was a little different. It didn’t involve an old man or a horse, but it did include that annoying neighbor in the fable … that was ME  a/k/a Debbie Downer.  No one was more surprised by this news than yours truly. As much as I want to deny the whole experience…I can’t….it’s true.

There I was sitting in Meeting sobbing due to the realization that I was slowly strangling my own life with predetermined judgments, while blowing any chance of peace of mind right out the window. Yep, Debbie has a way of sucking the life out of every party.

The Debbie Downer in me immediately put her negative judgment on the situation at hand. Why, because it’s easier than moving on to something new? Umm…yep. She put her preconceived notation that this new experience I was presented with was a “bad” idea and she wasn’t afraid to let it be known … over and over and over again. Clearly, Debbie is also a huge pain in the ass! What I wasn’t “seeing” was that this event was just a teeny tiny piece of a much larger story, one that needed to be TOLD not INTERRUPTED.

So, I spent months, yes months, holding on to what was comfortable, while fighting the new. I was literally being held prisoner by my own resistance!  It’s really no surprise that the tears were flowing because at that moment I was empowered to give Debbie the big heave-ho out of my head. Toodles Deb, don’t let the door hit ya! 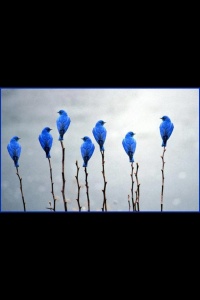 constantly need!  I need to stop killing my own chances at life and embrace the resurrections, even if they’re filled with challenges … I think I’m worth the risk.

Stop the death in your life by letting go of your attachments to the pain, the past and your pre-conditioned thoughts on how things are “supposed to be.”

Resurrect your life by embracing the challenges, the hopes, and the risks by letting things “just be.”

Leave a Reply to Life With The Top Down Cancel reply