It’s so funny that this subject should come up today, because I was just thinking about it this morning…when I was being my bright-eyed bushy-tailed self. As most of you know we have a new addition to our family, Peanut the Maltipoo.  I bring this to your attention because he was reason for my early bird thought this morning. Peanut and I are the first to get up in the house, which is great since we both seem to leave our beds with the same attitude … wide awake and ready to go.

I don’t require coffee or anything else for that matter to “wake-up.” No alarm clock or wake-up call for this girl. If my eyes are open, I am awake and little Peanut is the same way.

He jumps out of bed with vigor, runs like lightning down the steps, grabs a squeaky toy and is ready to play. Minus the squeaky toy, that’s pretty much my routine as well. 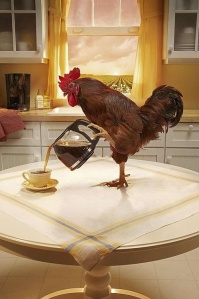 This stems back to my childhood when my father would bellow up the stairs “Hey! Are you going
to sleep your lives aways up there? I’ve been up with the chickens.” Um, number one it was 6 a.m. and number 2 I never saw a chicken around the house.”  This was bellowed almost every day of my young life and before I knew it I was up feeding those invisible chickens too!

Thank goodness I married another early bird, which produced 2 more early risers to the flock…actually 3 if you count Peanut, because if I’ve learned anything in this world, it’s that non-early birds really don’t quite get our perkiness. They don’t care to talk or even mumble for that matter until the sun is up and rolling for at least 4 hours. Hint: If you’re going on vacation with other people a pre-screening is highly recommended.

Doing my research for this little piece I’ve come to learn that the early birds really are a minority. I’ve seen hateful t-shirts, coffee mugs (how ironic), bumper stickers and last but not least an endless array of memes filled with death threats from the non-morning crew. There were some stooping as low as using babies and kittens to spread their evil messages.

Another road traveled by the non-morning crew is the mother of all mornings. Yep, you guessed it MONDAY. Whew, you want to talk about a bad wrap, this is it.

Who cares that it’s Monday? Honestly, if Monday weren’t Monday than the baton would be 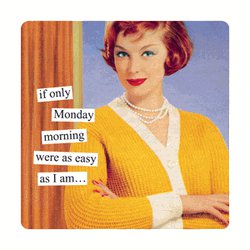 passed onto Tuesday. The party has to get started at some point..whether we like it or not so make the most of it.

I’m an Early Bird, always have been and probably always will be. I guess I will continue to get the worm while those Night Owls get the tequila. If we were all the same the world be so droll.

It doesn’t matter if it’s sun up or sun down as long as you … Enjoy the Ride!