It’s been a while since I’ve paused to do what I love so much, but better late than never folks. I bet you’re all wondering what the hell I’ve been up to over these past few months. Sadly the answer is NOT traveling the world with my lottery winnings in tow.

The biggest thing that has happened to us over the past few months is we have broken our ties with CABLE TELEVISION. That’s right people I am living the Antenna Life a/k/a Clean Livin’. Yes, I did say “no cable” and “antenna” in November of 2105.

This relationship came to erupt end when my son accidentally changed our plan via the remote when he was trying to order a movie. You know what prevents this from happening …. wearing your GLASSES.

Within minutes, I called our new server Verizon Fios to alert them of the 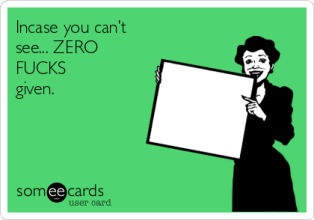 accident. Of course, I acted as if my son were a toddler playing with the remote opposed to the 20-year old ordering some god forsaken movie in the middle of the day, but that didn’t seem to matter. He could have been legally blind, randomly hitting buttons and zero fucks would still be given!

This is when I was informed that our plan was no longer available. In less than an hour our plan disappeared?  Yes. Apparently that’s how our plan rolled. I had no idea we had the playah of cable plans, the plan that jumped from one customer to the next without looking back.

After several calls to rectify this is a civil manner we were calmly told “there is NOTHING we can do.” Really? In 2015, there is N O T H I N G that can be done?  Not a single button could be pushed to rectify an accidental incident for a new customer … nada! Alrighty then ….

Have you ever gone from calm, cool and collected to cursing like Tony Montana? I have.

I won’t  bore you with the ugly details of these negotiations, just know they ended with more money in my pocket each month and a new pair of boots on my feet to prove it!

Leaving the 21st century wasn’t nearly as hard as I thought it would be … for us. My son’s response was “Whew! I got out just in time!” and my daughter responded with “I think I just saw a dinosaur walk by.” They think we have lost our minds, but they weren’t paying the bill so we don’t care.

Lilly doing duck lips before duck lips were a thang!

No fears people we do have a Smart TV that allows us an occasional re-entry into the current century via Netflix. But I must say, we’ve been enjoying the calmness of outdated sitcoms much much more than anything from this century. Less violence goes a long way, especially at bedtime.

I’ve been hooked on the original reality show The Munsters for weeks now. The Kardashians have nothing on this story line! Lilly and Herman recently had an awful argument, but no worries Grandpa and that hideous character Marilyn worked diligently to get them to make up. Do you see how deep I’m in? I’ll leave my other addiction, My Favorite Martian, for another post. I’m crushing hard on Bill Bixby … really hard.

Enjoy the Ride! Even if it’s in reverse, way back to the 70’s when we enjoyed life at a slower pace and weren’t polarized by fear, negativity and Donald Trump on a daily basis.