Where Is She? Daily Prompt: Mnemonic

noun  1. a device such as a pattern of letters, ideas, or associations that assists in remembering something.

I have an insane sense of direction. It’s indeed a gift. Especially in the days of traveling with male drivers pre GPS devices. Sorry guys.

Ever since I was a child, I could remember how to get from point A to point B from the backseat nonetheless.

I contribute this to my keen sense of my surroundings or my mnemonic image skills. That’s right ladies and gentleman, yours truly is a human navigational system via the pictures in my head.

When I was no more than 6, I remember sitting in the backseat of my father’s Caprice Classic looking out the window while taking notes on where we were going. Mailbox, blue words, brown building.

This came in handy when we were heading to the same place, and my father seemed to forget the left turn at the mailbox. I’ll never forget how impressed he appeared with my knowledge of direction.

Fast forward to me slaying my driving test. My sister went to Center City to get her hair cut at a high-end salon, but that’s another story. Anywho she called my father crying because she couldn’t seem to find her way to the train station to get home. 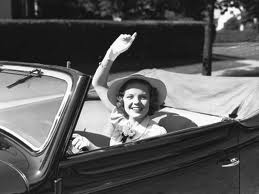 So, what does a father do when he doesn’t want to miss an episode of General Hospital to pick-up his lost daughter in the city? He summons his other daughter with her keen mnemonic image skills and fresh drivers license to fetch the one he claimed: “could not find her way out of a paper bag.” The 80’s were a different world people.

Mind you my license was fresh off the presses, I had never driven to the city alone, and yet my father seemed more than confident that I would be able to pull off this mission. Good thing I was fearless at 17.

Of course, my big question was “where is she?”

Since he was aware of my skills, he followed that up with “you know what city hall looks like right?” Um, yea.

“Well, that’s 15th Street. Just follow the numbers until you see a park on your left. Turn left at the end of the park, and you’ll see your sister crying on the corner.” Um, ok.

Considering I’m writing this story, and my sister is a married mother of two, you know that the mission was indeed accomplished without incident. Including that riveting episode of General Hospital.

Enjoy the Ride! Directions are optional.