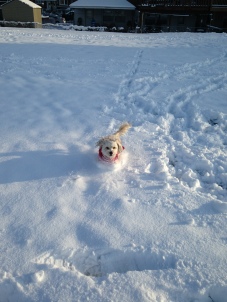 Today in Philadelphia we are dealing with some nasty weather conditions. Winter has arrived shutting everything down for the day. Yesterday it was shorts, t-shirts and record breaking temperatures, but that’s none of my business Mother Nature.

My luv bugs Peanut and Landon, who are on the same schedule, seem to have some “issues” with Mother Nature’s latest mood swing. They are no doubt the Felix & Oscar of the canine world.

Peanut and Landon are what we like to call a “low riders.” They have short legs.

We have discovered that Peanut does not care that he is built like Danny DeVito. He struts through puddles, snow drifts, and high grass as if he is working the runway.  Wet belly, snow balls stuck to his undercarriage like a canine Swifter without one single care in the world given.

In fact, Pee Wee has been channeling his inner Husky since day one. That’s right ladies and gentlemen, he can’t wait to hit the snow. He avoids all shoveled areas, leaves his coat in the house and intentionally climbs to the top of snow piles to gracefully leave a pile of his own. Shhh! He doesn’t know we pick it up.

Then we have Landon, who is also a low rider and owns it. He has zero interest in the snow or any other weather that does not include sunbeams with perfect temperatures. High maintenance is an understatement.

Landy Dandy does not have it easy when bad weather hits our area. Nope, not one bit. Unless you consider being CARRIED over puddles and patches of snow a hardship.

Landon, the Rosa Parks of canines, REFUSES to go out in the elements for any reason whatsoever. It’s a flat, solid … NO! He doesn’t even consider conforming to the masses. (ME)

So, while my neighbors are enjoying Netflix binges on this snowy day, I will be spending a good amount of my time freezing in my yard as I coax a dog to pee, and blow drying snow balls off of a husky wanna be.

Enjoy the Ride …. even when it’s slippery! 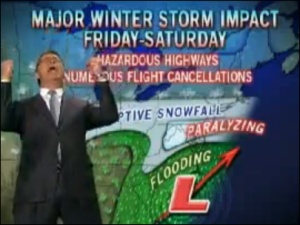 Here in good old Philadelphia we recently experienced the “The First Snow of the New Year”, which for some reason became a major news story.  Every time a flake fell a WEATHER ALERT interrupted my regular scheduled programing to report on the logistics of said flake. It really makes you want to spike your cocoa.

I would love for snow to go back to the days when it was just snow, before it became headline news. Snow has become the Kim Kardashian of precipitation and it’s equally as overplayed in the media.

Wouldn’t it be nice if snow could just go back to being the plain white pain in the ass it use be? I’ll probably sound all sorts of old right now, but I remember the days when it snowed, everyone dealt with it and we moved on. It was so easy…

No one was out interviewing people on their opinion of the flakes, while we sat glued to the “talking box” with bated 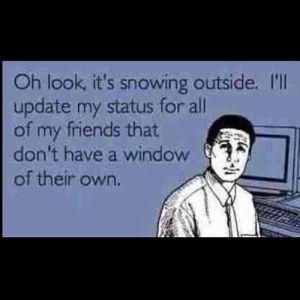 breath awaiting the judgements of these novice spectators. When someone with one giant tooth in their mouth claims “the roads were fine” I have to question their credibility. If they can’t see how horrid that tooth looks every damn day they certainly aren’t seeing dangerous road conditions … just sayin.

No one was bringing camera crews out to empty parking lots to report on the emptiness of the parking lots and no one and I mean NO ONE was in our face 24/7 informing us about every single movement of these flakes! This does not include the amateur reports on Social Media, which are enough to trample even the strongest of nerves.

One would think that with ALL of the information that was being provided by our media, PEOPLE would have a better understanding of let’s just say … Snules a/k/a Snow Rules. Um, yes they exist is the land of common sense where I reside. Sadly someone forgot to forward the memo over to the land of asses, which happens to be extremely overpopulated these days. I have dubbed these people Snasses … a/k/a Snow Asses.

Snules: n. a piece of advice about the best way to do something.

Snasses: n. a group of people who don’t follow snules; referred to an ass, a-hole or stupid ass on clear weather days.

Below are just a few examples of Snasses and Snules, you know for the next round of flakes. Feel free to take notes.

Snass: On my white knuckle ride home from the gym during the start of “The First Snow of the New Year” I had someone riding my bumper like I was twerking it up at the VMA’s.

Snule: Unless you are about to perform a colonoscopy I suggest you stay a safe distance behind strange bumpers.

Snass: On Friday afternoon, while on my way to the food store for you guessed it …. milk, I encountered what I am lead to believe was a mini van, but since it was completely snow-covered other than the non proportional eye slots no one will ever really be sure, which I’m guessing was the point.

Snule: When you head out onto the roads clean the snow off your car. This includes the ENTIRE vehicle, especially the large glass surface used to SEE the road. Clearing two spaces for your eyes will not suffice.

Snass: On Saturday afternoon my daughter and I were out and about on a quest for new bras. New year… new bras. Any who 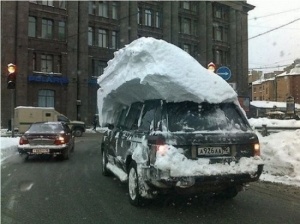 …  I was being incredibly contained not mentioning the tower of snow on top of the vehicle driving in front of us, but then my daughter unleashed its existence leading to the creation of the word “snass” during my mile long rant.

Snule: Refer back to number 2 to include the ROOF of your vehicle. Driving with a glazier on the top of your vehicle causes blizzard like conditions for everyone driving in your wake. The ONLY exclusion for leaving snow on top of your car would be your lack of arms.

Snass: Parking lots…ugh where do we even begin. Ok, I think it’s safe to assume that the large group of people who decided to venture out for some sales were seasoned mall patrons. Therefore they know EXACTLY how the parking lot is designed and how to use it properly.

Snule: So, unless you have documentation of acute memory loss you need to park in an actual spot…the SIDEWALK leading up the door of the store is NOT suddenly a spot and you know it.

Snass: We all know that being out in your Hummer in the middle of a suburban snow storm makes you feel like some sort of warrior, but let me give you a heads-up … YOU’RE NOT. In fact, driving that thing outside of Afghanistan makes you look ridiculous whether it’s sunny or snowing.

Snule: Unless you are actually driving your oversized vehicle through a snow storm in a war zone, you need to SLOW the hell DOWN and remember you might get to go faster, but you’re not going to stop faster. 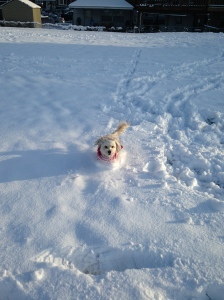 Dashing through the snow…enjoying the ride!

Since we are not even through week one of January, it’s safe to say that there will be more snow to come here on the east coast. So please follow the Snules, don’t be a Snass and just Enjoy the Ride!